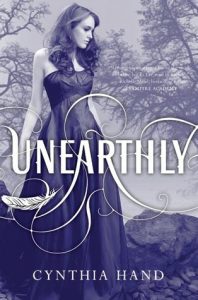 In the beginning, there's a boy standing in the trees...Clara Gardner has recently learned that she's part angel. Having angel blood run through her veins not only makes her smarter, stronger, and faster than humans (a word, she realizes, that no longer applies to her), but it means she has a purpose, something she was put on this earth to do. Figuring out what that is, though, isn't easy.

Her visions of a raging forest fire and an alluring stranger lead her to a new school in a new town. When she meets Christian, who turns out to be the boy of her dreams (literally), everything seems to fall into place and out of place at the same time. Because there's another guy, Tucker, who appeals to Clara's less angelic side.

As Clara tries to find her way in a world she no longer understands, she encounters unseen dangers and choices she never thought she'd have to make between honesty and deceit, love and duty, good and evil. When the fire from her vision finally ignites, will Clara be ready to face her destiny?

Unearthly is a moving tale of love and fate, and the struggle between following the rules and following your heart.

My expectations were fairly low, when I started reading Unearthly. I didn’t know what to think or make of it, since it had the potential to be a Twilight. Thankfully, it proved me wrong in every way that mattered.

Rather than a novel about destined love, it’s a sweet romance. Simply put a story about a girl, who happens to be a teen angel who falls for the wrong boy. What makes this sweet story amazing is that this wrong boy, helps bring out a different side of Clara, I’d say her more human side.

As to her purpose, what made this book better than your standard Young Adult novel was the involvement of her family. Where most mothers seem to be complacent or siblings act irrationally, they behave like a normal family. True, they have the whole angel blood and purpose part to figure out, but this family behaves and acts like a family. They have rules, the parent is not blind to kids sneaking out, and this mom would even issue out consequences.

Clara’s honesty about her shallow side, from dying her hair a hideous shade of orange, to hating the fact she lost her popularity rank made her appealing. Her fights with friends and worries about fitting in and her appearance made Clara an everyday teen.

Sure, the cosmology was simple, but I forgave the author. By the end I felt so enchanted with the series, I bought the next book immediately. The love story is unique and the way the story plays out kept surprising me, which made me become fond of the characters. This is definitely a series I’d add to a classroom library. 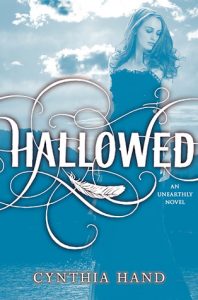 For months Clara Gardner trained to face the fire from her visions, but she wasn't prepared for the choice she had to make that day. And in the aftermath, she discovered that nothing about being part angel is as straightforward as she thought.

Now, torn between her love for Tucker and her complicated feelings about the roles she and Christian seem destined to play in a world that is both dangerous and beautiful, Clara struggles with a shocking revelation: Someone she loves will die in a matter of months. With her future uncertain, the only thing Clara knows for sure is that the fire was just the beginning.

In this compelling sequel to "Unearthly", Cynthia Hand captures the joy of first love, the anguish of loss, and the confusion of becoming who you are.

In many ways I feel this novel is the conclusion to the series-regardless of the third book. Clara starts receiving visions of where her future is headed. And her visions indicate Tucker may die.

My minor nitpick (a huge issue in book 3) involved the new information we learned about visions. They became more of a self fulfilling prophecy, than something divine. A lot of Clara’s visions were results of her actions as opposed to something supernatural happening.

Another issue I had was how her brother’s vision never received the true fleshing out it needed. I believe from a writing standpoint, the decision was based on the fact that it was 1st person POV through Clara. It helped emphasize how self involved Clara was and the choices she made. It still didn’t make it easier.

The ending and difficult decisions Clara made were beautiful and epic in size. Now here’s my warning: at this point you have a choice. You can end the series here, content with the end of the story or take a chance with the third book. If I had to do it again, would I read the third book…maybe, maybe not, but I wanted you to have the option to choose. 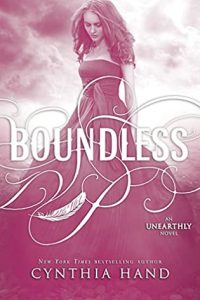 The past few years have held more surprises than part-angel Clara Gardner could ever have anticipated. Yet from the dizzying highs of first love, to the agonizing low of losing someone close to her, the one thing she can no longer deny is that she was never meant to live a normal life.

Since discovering the special role she plays among the other angel-bloods, Clara has been determined to protect Tucker Avery from the evil that follows her . . . even if it means breaking both their hearts. Leaving town seems like the best option, so she’s headed back to California - and so is Christian Prescott, the irresistible boy from the vision that started her on this journey in the first place.

As Clara makes her way in a world that is frighteningly new, she discovers that the fallen angel who attacked her is watching her every move. And he’s not the only one. . . . With the battle against the Black Wings looming, Clara knows she must finally fulfill her destiny. But it won’t come without sacrifices and betrayal.

In the riveting finale of the Unearthly series, Clara must decide her fate once and for all.

What I most liked about Boundless centered on the cosmology. Its interpretation of hell, rang true from a Catholic perspective. In essence, hell is a place where you are separated from the divine. The book takes a literal approach with “a sad place with some demonic influence”. However, the fact she took the time to insert those details mattered.

The description is not perfect from a Christian point of view. Many people writing about Christianity forget that Hell is a place without God’s love-it’s why it’s so horrible. Granted, the version of hell in a teen novel is overly simplified. However, I haven’t seen many angel series get that particular detail correct, even if described too simply.

Some of the major issues were the pacing and the feeling that Boundless no longer knew if it fell under the young adult genre. The novel no longer had the passage of time help. Using the relaxed schedule of Stanford seemed to slow the plot down even more.

Many life choices were made, some more damaging than others, but none of that seemed to matter as much as Clara’s unresolved issues.

She made a choice. She left Tucker in book 2. While Clara and Christian are not a couple at the start of novel, it’s hard to ignore he became her ideal partner. Yet the ghost of Tucker continued to haunt the series. This became the issue that would not die.

And the end…oh that ending. Whereas book 1 and 2 pleasantly surprised me, the major twists lacked that affect in Boundless. The twists dealing with Clara’s brother fell flat. The ending left more questions, and I felt undid the entire novel. It felt that a happily ever after was carelessly tacked on, because that was a genre expectation. And if it was, there had to be a better way to write it.

While I still loved the series overall, Boundless was the weak link. It’s fair to tell readers to stop at book 2, though if they continue to be prepared for a weak ending.