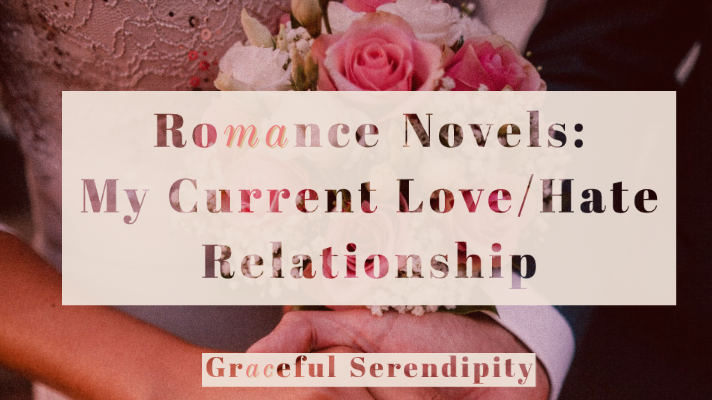 As I’m quickly going through romance novels, particularly New Adult, as I have a huge stash of them in my kindle, I keep giving low reviews. Perhaps, I’m even too generous and they need to be 1 star reviews. I notice I continue to search for a romance novel that doesn’t exist.

Part of it may be that I love reading and happened to read classics at an early age. I remember reading Gone with the Wind in middle school and being upset that I had to return it, because my history project was over. I could not believe I was never given the opportunity to read such a long book before, book nerd that I was. No one believed, I bothered to read that book. I chose it because it was huge and I liked the cover-you know practical middle school reasons. (Side note: As an adult, I do need to reread Gone with the Wind, because 11/12 year old me did not pick up on a lot of underlying issues.)

And while some romance novels have entertained me, none have really blown me away since my reading hiatus. I do remember loving Tammara Weber’s Easy, but since then, I don’t believe I’ve found a captivating romance.

My Current Issues With Romance

The problem I’m finding is the characters are usually white, biracial but only mention their heritage once and seems to default back to white, rich, stupid, naive, aggressive, jealous, lacks the ability to communicate, or any combination of what I mentioned.

There’s nothing wrong with having a white protagonist. But when they’re all white, rich, and damaged somehow on a profound manner, or confuse upper middle class and lower upper class with being poor…well…that gets boring. And then the books I read about Latinos, somehow always find themselves stuck in oversized dickie shorts, saying “ese” or something ridiculous that belongs in the 90s movie Dangerous Minds.

Also the plot may be about “finding themselves”, but usually the plot revolves around the characters lacking the ability to communicate and find a decent therapist. Most of the novels I read, the couple should have either tried couples counseling to avoid the issues they go through or the protagonist should have left the boyfriend, because he wasn’t worth it.

Let’s Not Forget The Sex…

To top it off, some characters seem to have sex, just to have sex. Not in a, “I’m free and sexually liberated” kind of way or even, “because we’re in love,” rather most of those intimate scenes seem to be included, because they have too as that’s the genre expectation. No character development, no actual thinking afterwards if the relationship was rocky. Certain romance novels read as if once they pass a set number of pages the required mandatory love scenes follow. The characters go back to ignoring each other and acting like lunatics until either a third party or some event makes them realize…communication does help.

So, why not write your own book? While people who specialize in literature love to criticize the romance genre, writing a romance novel is amazingly difficult. I applaud romance novelists for publishing an arduous piece of work. One draft of a romance I’m working on, stumped me as the chemistry and reasons the characters liked each other annoyed me. The same way they would if I was simply reading the novel by another author. Rather then likeable characters, I want real characters, whose flaws are just as important to the story as their strengths.

And the intimate scenes…I can’t write them, because I want to giggle. Is it too silly, mundane, maybe a simple curtain call to dark scene?

I want a romance with well developed characters, where the heroine isn’t always naive and helpless. Imagine a romance where the plot though moved by the romantic development, is spurred on more than just emotions and ridiculous plot conventions to get from A to B.

I want a Romeo & Juliet, though less tragic and with an older couple. I want a Cleopatra and Antony. Sometimes I wonder if something more honest like Joker and Harley, where people, (especially Harley) realized the relationship lacked love, no matter the emotions involved. In fact, I’d settle for a Beauty and the Beast, where looks don’t matter, but Stockholm Syndrome wasn’t a major key factor.

This kind of romance has to exist. I guess the question is, why can’t I find it? And more importantly, do I have to write it? 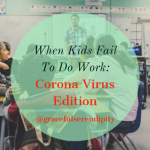 When Kids Fail to Do Work: Corona Virus Edition