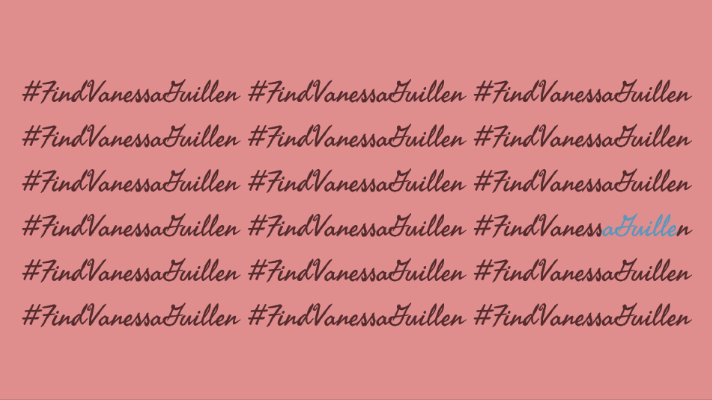 As you know the world we live in today changed from the one we experienced a few weeks ago. The reason being many people have awakened to realize the trials and tribulations others go through. For the first time people see complexities in our society.

I truly believe in God, so forgive me if this post lacks the usual professional quality. I wanted to speak to you from the heart.

For me, in order to amplify my voice, I wanted to do my part to help my community. Though my blog may be small, I felt my voice loud enough to shout. We need to find Vanessa Guillen.

While this may be the latest update as of June 15, what disturbed me was the fact many days went by before anything was officially done. For those not familiar, Vanessa had spoken to her mother about sexual harassment she experienced from a commanding officer. She discussed her fears and mentioned how others went missing.

Then on April 22 she disappeared. The back and forth between the army base and her mother calls into question the integrity of the army, especially when those on the inside warned Vanessa’s mother about the corruption of the system and how Vanessa was possibly kidnapped.

As you continue to search for more information it becomes apparent the rampant sexual abuse became a factor. The Battered Women’s Justice Project Reported, “Women who enter the military at younger ages, those of enlisted rank, and those who experienced sexual assault prior to entering the military, appear to be at increased risk of sexual assault while in the military.” If anyone still has doubts, then a quick search from both Vanessa Guillen’s Missing Instagram page and the military’s authorized Fort Hood Sentinel media outlet both agree with a certain number.

Currently the estimate is about 200 people went missing from Fort Hood. The Fort Hood Sentinel explains in detail what happens when a soldier disappears, but it doesn’t account for corruption. It does however, corroborate the number based off a 2016 figure.

This isn’t simply a Fort Hood problem. Cases range from the disappearance of Gregory Wedell-Morales to LaVena Johnson who the Department of Defense ruled she committed suicide, although her body showed signs of rape and torture.

Do You Believe It To Be Physically Possibly To Kill Yourself Minutes After You’ve Been Brutally Raped and Tortured?

Aside from rampant sexual abuse, Fort Hood also had 6 Fort Hood soldiers arrested. I’m neither a detective nor a private investigator, but based on everything you read, wouldn’t you want to know if there is a connection?

If you were the coroner examining LaVena’s body, wouldn’t you be slightly curious as to how someone that experienced “[a] broken nose, black eye, loose teeth, burns from a corrosive chemical on her genitals, and a gunshot wound that seemed inconsistent with suicide,” had the sudden power and skill to botch her own suicide?

If you were in Fort Hood and learned that Vanessa was afraid of the sexual harassment and what would happen if she reported her sergeant-wouldn’t your investigation begin with him? Would he not be an official suspect, or even a person of interest?

What can you do?

First, learn more about Vanessa’s case. New details and facts are bound to be released long after I make this post.

Second, use your voice. Aside from Instagram, Twitter, Facebook and other social media sites, we have an array of elected officials who represent us. If you’re in Texas, contact them. Ask them, what exactly is going on in Fort Hood.

For Those in Texas…

I don’t know how Vanessa’s story ends. What I do know is that her life should not be on the pages of some forgotten mystery. If the very military cannot even protect its own, who can we truly trust? She promised to sacrifice her life for her country, not to be a victim of it. We owe her that much.

When Kids Fail to Do Work: Corona Virus Edition